"It is probably the best facility of its type in the world, and the perfect showcase of how to design and build innovative sports cars."

While its cars are still hand built, taking around 200 man-hours each, the technology involved these days has more in common with the aerospace industry. The number of full-time engineers working at the company has multiplied from 20 to 200 and its new production plant in Warwickshire is the first purpose-built facility in the marque's history.

At four times the size of its old plant in Bloxham, Gaydon became the company's new HQ as well as housing design studios (incorporating a show room, five axis milling facilities, a wood mill, composite manufacturing area, a colour and trim studio and a 3-D visualisation suite), a climatic test area, power test units and pass-by noise facility. Roiton Group carried out much of the design work for the facility.The brief started out as a number of phased buildings on the site but this steadily developed into a single building that would house the production facilities, design and administration departments, all of which had to convey a modern timeless design.

"Aston Martin estimated it will have around 1,000 visitors to the site a year, mainly purchasers coming to look at their new cars being built, so it was also a showroom for the marque as well as the HQ," says Rolton Director Chris Evans. ''The brief was that this had to be a factory which they could quite comfortably take people around and be proud of, as the entire building is the showroom."

The design team visited a number of other facilities in the UK to benchmark against. This included the Swindon Motorola factory, which reflects the 'electronics industry' degree of quality and cleanliness that the client wanted to achieve.

Following the tender phase, Rolton was taken on by main contractor SDC Construction to provide building services, structural and civil design along with architects The Weedon Partnership. An open book partnering agreement was subsequently drawn up with a guaranteed maximum price.

A development of this size is bound to be imposing; it measures around 100m by 150m and is 10m at its highest point, but the 22-hectare site is landscaped with a series of earth berms, 900 new trees and 2,000 shrubs in a bid to lessen its impact. There are two entrances to the site, one of which is devoted to individually invited customers and which brings you up in front of the two-storey front of house area. This is clad in buff Derbyshire sandstone, punctuated with a series of windows, and contains the customer reception, client rooms and conference suites. The double-height entrance is as much a showroom as a reception area, finished in a contemporary style with a terazzo floor and back-dropped by a courtyard garden.

On the ground floor, alongside this front of house area, are administrative offices and the company restaurant, with further office space on the first floor, all of which sit behind full-height glazing.

The production facilities are immediately adjacent to the offices, separated by a double-height 'street' which acts as an informal meeting area and a light well to the back of the open-plan office floor plates. The design team wanted to achieve good levels of natural light within the production space: externally it is clad with a self-supporting flat panel system but full-height glazing dominates the west-facing facade, and large roof are incorporated along the internal street which runs north-south through the space. Racking has been deliberately kept below 1.6 m throughout the area. "When you walk into the facility you can look across the whole space," explains Chris. "You can see where the full-height glazing is and that means workers are given a relation to the outside world."

The building was modelled in 3-D at an early stage in the design process, which allowed a number of critical areas, mainly to do with the glazing, to be analysed.

Glare could potentially have been a problem for those working on the production lines and this was modelled - using IES for a typical day in March - to determine how far into the building the sun would penetrate.

The full-height glazing to the offices presented similar concerns and it was determined that blinds would be needed and would help maintain temperatures during the day.

The specialist nature of certain facilities within the production area, such as the paint shops, led to them being contracted out as a separate package. But there were other areas where tighter control was required. The rate of change of temperature in the co-ordinate measuring machine room, where the tolerances of the chassis are measured, is closely controlled, as any expansion of the vehicle may affect readings. The space around the car is maintained at 21°C with a +/-1 °C set point on the return air. 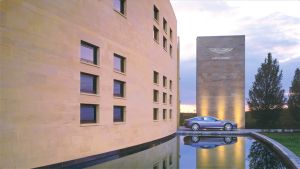 In addition to the high bay fittings within the production area, an effort has also been made to uplight the underside of the roof This helps 'lift' the height of the space and emphasises the clean and airy environment - as well as the polished concrete floor. White has been used for a lot of the internal finishes including most of the steelwork, cladding and sprinkler pipework. It was also considered for the ductwork although eventually ruled out on grounds of cost. Low-level fluorescent fittings are used in other areas such as the checking bays where higher levels of colour rendering are required.

Light pollution was an issue with the external lighting scheme and led to planning constraints on the type and extent of the fittings that could be used. On the plus side it is a secure site so safety wasn't a major concern. Bollards are used to mark the way from car parks to the building's entrances, while the road up to the development is flanked with blue, solar powered cats eyes. The building consists of an entirely functional office block and adjoining production building, Gaydon's stylish exterior design reflects the old idea that an Englishman's home is his castle, with a moat and a deep gravel drive, set in this case amid gently rolling countryside.

Rolton's Andrew Chisem and his team worked on the civil and structural aspects of the design. From Andrew's point of view, the inside of the building, although highly impressive, required nothing more advanced than state of the art engineering and a simple, well thought-through design. The production facility provides a clean, clutter-free, modern environment where all members of staff can work together. To maximise the production area for the client, the trusses were spaced at nine metres, spanning 40 metres with a hit and miss column arrangement.

Rolton worked on the detailing of the giant pits (up to 4 metres deep by 60 metres in length) to accommodate both the motors and conveyor that pull the cars along the conveyor system. The pits are built of reinforced concrete with an expanded hydrophilic seal that prevents water entering the joints between the base slab and the walls. Customers are regularly shown around the production area where all services, including the supports for the production line, are suspended from the trusses. The result is a neat, clean, environment that looks its best when prestigious visitors and VIPs are being shown around.

The drainage for the car parking areas is provided by a matrix paving solution that utilises the voids between layers of single size aggregate to provide storage and ease the off site water discharge. The cut and fill exercise was modelled three dimensionally, to minimise cart away. Much of the cut material was formed into embankments to minimise environmental impact. This had an added benefit, because the drainage ditches formed an environment that maintains and supports local wildlife.

It is probably the best facility of its type in the world, and the perfect showcase of how to design and build innovative sports cars.
Dr Ulrich Bez
CEO Aston Martin