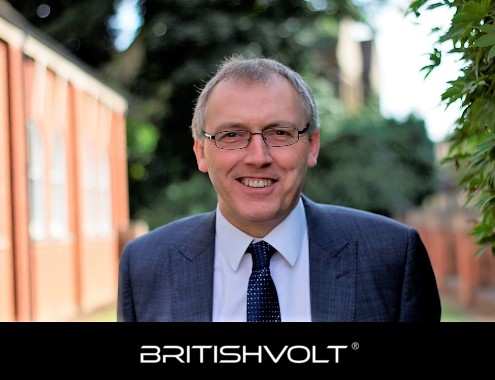 London, 18 September 2020 Britishvolt, the UK’s foremost investor in battery technologies, has announced the appointment of Peter Rolton to the Board of Directors as a non-executive director.

Peter Rolton is Chairman of the Rolton Group, which has already been working extensively with Britishvolt, providing high-level strategic advice and undertaking all engineering design for the UK’s first battery gigaplant.

Peter has extensive expertise in energy, low carbon design and engineering of the built environment and has over 30 years’ experience in engineering complex construction projects. As a Director of Rolton Kilbride, who is providing a sustainable future for the UK’s energy needs, he is well positioned to provide strategic support on the gigaplant project. He has also acted as a Government advisor on renewable and low carbon technology implementation, regularly reporting at ministerial level.

Britishvolt CEO, Orral Nadjari said: “We are delighted and honoured that someone with Peter’s experience and expertise has agreed to join the board of Britishvolt. His counsel will be critical as we move to our next phase and our mission to build the UK’s first battery gigaplant that will be crucial to the future of the UK’s automotive and renewable energy sectors.”

Chairman Rolton Group, Peter Rolton said: “As someone who has been close to Britishvolt since its inception and who believes wholeheartedly in the need for the UK to be at the forefront of electrified technologies and low carbon energy, I am delighted to join Britishvolt as a non-executive director.

“I look forward to working even more closely with CEO, Orral Nadjari, and his expert team, contributing to the mission to build the UK’s first battery gigaplant. This project is crucial for the entire UK industrial sector and I am excited to be part of it.

“The Rolton Group looks forward to working with leading Italian design experts Pininfarina, Project managers and architects Ridge, who will be key to defining and creating Britishvolt’s manufacturing and R & D facilities.”

Britishvolt’s gigaplant is set to be one of the largest industrial investments in British history. It will produce world-leading lithium-ion battery technology for the automotive and renewable energy sectors.

Britishvolt’s aim is to establish the UK as the leading force in battery technology. It is working with leading partners and suppliers to achieve this because it is of paramount importance to the future of the UK automotive industry and the overall economic and industrial health of the UK.

The company believes that the UK is the right place for its investments because of the strength of its automotive and energy industry, its expertise and history of industrial and academic battery research and development.

2023 has been targeted as the start of production at the gigaplant. It is situated in 80+ hectares of green industrial park, a 200MW solar park, with a production capacity of up to 30 GWh.

We are delighted to announce that our @CyberEssentials Certificate has successfully been renewed for the third year… https://t.co/k9oTCa9MKt