This year, 46 teams competed in the race and following a safety briefing, Rolton Group's 'Higham Five-0' crew took to the water and gave it their all. Despite windy conditions and choppy waters, 'Higham Five-0' finished three heat stages as a top 12 competitor, propelling them to the semi-finals. 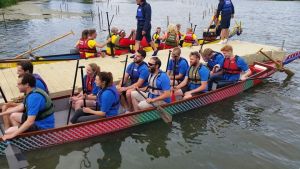 The rain held off throughout, and fuelled by bacon sandwiches and barbecue food 'Higham Five-0' ultimately went on to achieve 12th place. To celebrate a great effort by all and a very respectable result, the team joined colleagues at the Rolton Group gazebo to enjoy refreshments while watching the final race.

Successfully defending their 2015 title, the overall winners of this year's Nene Valley Dragon Boat Race were team A1 Fitness.

The Nene Valley Dragon Boat Race is organised each year by the local rotary clubs and aims to raise money for Lakelands Hospice, Cransley Hospice and other charities supported by the local Rotary clubs. As well as the race, there was a great atmosphere with plenty to see and do on the day including crafts, stalls, live music, games and entertainment all around, to help raise money for local causes.

WE ARE #RECRUITING! We are looking for an experienced #Revit #MEP #Technician to join an existing team at either o… https://t.co/pVQSXSnAdU