The Rolton team arrived bright and early at the picturesque Wicksteed Park, ready for the first race of the day at 10am. There were 40 teams in total, each of which was guaranteed three races with the twelve fastest teams qualifying for the semi-finals. There were three semi-finals, with four teams in each one, all of which were very close. Two teams capsized during the day, providing great amusement for those spectating when the rescue boat came to save them.

The Rolton team fought well to reach the semi-final, however after coming second in theirs, they were very unlucky not to make the final as the fastest loser by 0.02 of a second. This resulted in the team coming in 7th place overall, which is very commendable! 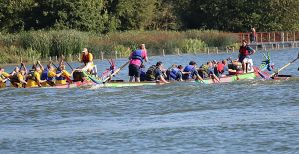 The whole day was in aid of raising money for two local charities: Lakelands Hospice and Cransley Hospice. Other than the boat racing, there were lots of other activities and entertainment throughout the day including charity baking stalls, a car boot sale, traditional country band playing live music and a football challenge where participants had to save penalties.

Overall it was a fantastic day with some beautiful weather! Thank you to all of the Rolton Group staff who attended to support the team and the charities and a big thank you to those of Rolton Group who braved the boat! Photographs of the day can be found here.

Our team are proud to have donated £250 to local charity, Little Miracles (@littlemiraclesp) and £250 to The Squirr… https://t.co/TsCOOZb6QU