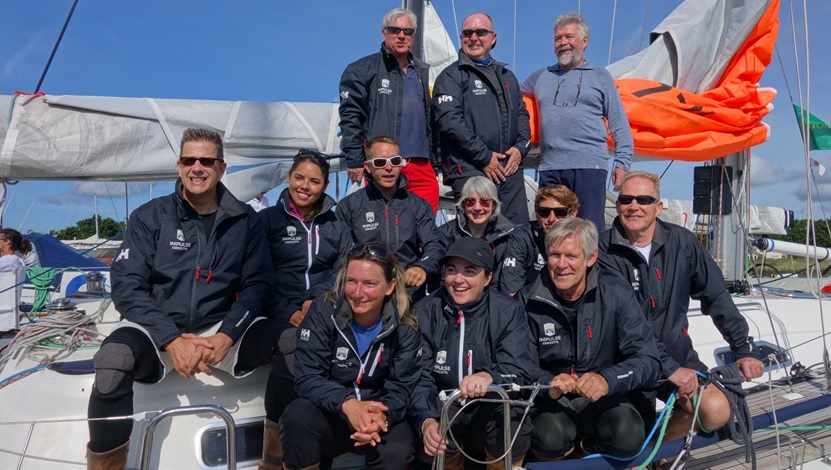 The Rolex Fastnet Challenge, which is considered to be one of the most demanding classic offshore races in the international sailing calendar, spans 600-nautical miles. Chris and his team completed the challenge in an impressive 4 days and 13 hours.

The team set off from Cowes in the Isle of Wight on the 6th August, where the route took them past the notorious Fastnet Rock off South West Ireland, before passing the Scilly Isles and finishing in Plymouth. During their time at sea, they encountered demanding and treacherous weather and sea conditions that saw 34 yachts fail to finish the race and three lose their mast/rigs. The gruelling conditions were unforgiving with Chris and the team facing over nine hours of 20 – 25 knot winds and two metre high waves at times, resulting in members of the crew being lifted out of their bunks, as what felt like half the yacht was raised up in the air before crashing down into the trough of the next wave. Needless to say this was certainly Type 2 fun!

After rounding the rock and on his way to the Scillies with the largest spinnaker deployed, the wind peaked at 23 knots which, in conjunction with difficult sea conditions, resulted in the yacht broaching. The calmness of the skipper and alacrity of Chris on the helm righted the situation, who subsequently replaced the kite for a smaller and tougher sail.

In the run up to the challenge, the team took part in safety training and three offshore races, to ensure they were prepared for the challenge ahead. With the conditions they faced, this preparation definitely helped, and greeted by cheers from friends and family the team crossed the finish line at 1:45am on Friday the 11th August.

Chris’ chosen charity was CERU, a specialist facility for post-intensive care patients who have suffered serious head trauma. Our Chairman, Peter Rolton, has witnessed first-hand the excellent care given by CERU to his son following a car accident last year – a misfortune that hit close to home for Chris, whose son also suffered a serious head injury that resulted in a bleed on the brain in a footballing accident four years ago.

“All of the team at CERU would like to send a huge thank you to Chris and the team for fundraising this amazing amount of money for the unit. Funds raised for the unit go towards improving the patient experience by providing resources to stimulate and engage patients, specialist equipment adapted to meet the unique needs of our patients, or enhancing the communal ward areas to engage patients and make their visitors more comfortable.”

“I am delighted with the incredible amount of money we have managed to raise for a charity that’s very close to my heart. The grand total completely justifies the 150 hours of gruelling training and the race itself. The CERU facility is hugely important and I am delighted with the overwhelming response of people who have supported me in helping raise money for such a worthy organisation.”

When questioned, “Would you do it again?” Chris replied:

“If just for the sunsets, sunrises, racing dolphins and a wealth of stars I would answer maybe… but once you throw in the camaraderie, experience gained and the joy of helming at night a 46ft yacht under a spinnaker, down two metre waves I would have to change that answer to an absolute YES!!”

To date, Chris has raised a fantastic £6,145, surpassing his original target of £5,000. If you would like to show your support for Chris’ achievement and for this utterly brilliant charity you can still donate here.

If you’d like to see how Chris and his team got on, you can watch a short video here, and photos from his journey can be found on his Facebook page.

Our team are proud to have donated £250 to local charity, Little Miracles (@littlemiraclesp) and £250 to The Squirr… https://t.co/TsCOOZb6QU